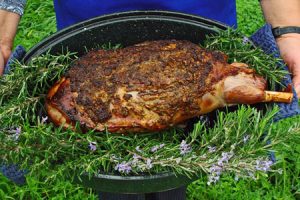 Blend marinade ingredients in a blender, just a few pulses until well mixed.

1 Marinate lamb: Place lamb and marinade into a plastic bag. Squeeze out as much of the air as possible from the bag and seal. Wrap again with another plastic bag to ensure that the marinating lamb doesn’t leak.

Marinate for several hours, or overnight, in the refrigerator.

Remove the lamb, still in its marinade bag, from the refrigerator at least an hour (preferably two hours) before putting in the oven to help bring the lamb closer to room temperature before roasting.

Note that this arrangement of racks and pans, with the roast sitting directly on the oven rack, will create a natural convection of heat in the oven, causing the roast to cook more quickly than if cooked the traditional method in a rack in a roasting pan.

3 Season lamb and place in oven: Remove the lamb roast from its marinade bag (you may want to temporarily place lamb in another roasting pan, just to make it less messy to work with.) Pat dry the marinade off the lamb with paper towels.

Generously salt and pepper all sides of the roast. Arrange the roast fattiest side up, so while the lamb is cooking the fat will melt into the meat.

Place the roast directly on middle rack of the oven, with a roasting pan on a separate rack a rung lower, to catch the drippings. You may also want to put some water in the bottom roasting pan, so that the drippings fall into the water instead of burning in the hot pan and smoking up your kitchen.

In general estimate 10-13 minutes per pound for total cooking time (for rare), including that first 20 minutes at high heat. (Assuming you let the roast sit out for an hour or two before putting it in the oven. If it’s right out of the fridge, it will take longer to cook.)

Note that the method of cooking directly on the oven rack will mimic a convection oven and the cooking time/oven temp needed will be less than you would need if you cooked the roast on a rack in a roasting pan. If you are cooking the roast directly in a roasting pan, rack or not, start the roast at 450°F and after 20 minutes reduce the heat to 325°F.

Also, the shape of the roast will have an impact on the cooking time. Our roast was rather long and thin, so it cooked up fairly quickly. A thicker roast may take longer than expected.

So, use a meat thermometer!

About 20 minutes before you expect the roast to be done, start checking the meat thermometer. Note that every time you open the oven door, you’ll need 10 minutes or so to bring the oven back up to temperature, thus slowing down the cooking process. So, don’t check too often, or use a remote meat thermometer. Remove the roast from the oven anywhere from 125°F to 135°F for medium rare. Lamb should never be cooked until well done or it will be too dry.

5 Let rest: Let stand for 25-30 minutes before carving (so the juices don’t all run out when you cut into it). Cut away the kitchen string and slice with a sharp carving knife, 1/2 inch thick slices, against the grain of the meat.

Serve with some mint chimichurri or homemade mint jelly.

This entry was posted in Recipes on April 8, 2020 by wpalace.
Virtual Design ServicesWalnut in Wareham